WHAT IS RADIOFREQUENCY ABLATION OF LIVER TUMOURS?

Percutaneous RFA is an effective treatment option for patients who might have difficulty with surgery or those whose tumours are less than 3.5 cm in diameter. It may be used in addition to chemotherapy, radiation therapy or surgery or as an alternative surgical treatment. The success rate for completely eliminating small liver tumours is greater than 85 per cent.

Percutaneous RFA uses imaging guidance such as ultrasound or computed tomography (CT) to place a needle electrode through the skin into a liver tumour. High-frequency electrical currents are passed through the electrode, creating heat that destroys the cancer cells. At the same time, heat from radiofrequency energy closes small blood vessels and lessens the risk of bleeding. The dead tumour cells are gradually replaced by scar tissue that shrinks over time.

RFA can also be performed during open or laparoscopic surgery as in some cases superficial tumours can be wedged out (excised) surgically, while deeper lesions can be destroyed by RFA, thereby preserving most of the liver tissue.

The range of indications for percutaneous RFA is becoming wider and includes the following main categories:

RFA is a relatively quick procedure and recovery is rapid so that chemotherapy may be resumed almost immediately in patients who need it.

HOW SHOULD I PREPARE?

You may be instructed not to eat or drink for eight hours before your RFA.

Prior to a RFA, you should report to your doctor all medications that you are taking, and if you have any allergies, especially to anaesthesia or to contrast media containing iodine. Also, inform your doctor about recent illnesses or other medical conditions. Women should always inform their doctor if there is any possibility that they are pregnant.

Your doctor will advise you to stop taking aspirin, nonsteroidal anti-inflammatory drugs (NSAIDs) or blood thinners three days or more (depending on the drug) before your procedure. Prior to your procedure, your blood coagulation may be tested.

The equipment used in this procedure depends on the type of imaging guidance.

The radiofrequency generator produces electrical currents in the range of radiofrequency waves. It is connected by insulated wires to the needle electrodes and to grounding pads that are placed on the patient’s thigh.

Other equipment that may be used during the procedure includes an intravenous line and devices that monitor your heart beat and blood pressure.

HOW IS THE PROCEDURE PERFORMED?

Image-guided, minimally invasive procedures such as RFA are most often performed by a specially trained interventional radiologist in the operating room or in the Imaging Department.

RFA is usually done on an inpatient basis. You are usually hospitalised the day before the procedure and discharged on the next morning.

Each RFA takes about 30 minutes, with additional time required if multiple ablations are performed. The entire procedure is usually completed within one to two hours.

WHAT WILL I EXPERIENCE DURING AND AFTER THE PROCEDURE?

You will feel a slight pin prick when the needle is inserted into your vein for the intravenous line and when the local anaesthetic is injected. Most of the sensation is at the skin incision site which is numbed using local anaesthetic.

If the case is done with sedation, the intravenous sedative will make you feel relaxed and sleepy. You may or may not remain awake, depending on how deeply you are sedated. If you are put under general anaesthesia, your throat may be sore after you wake up. This is caused by the breathing tube that was placed in your throat while you were asleep. 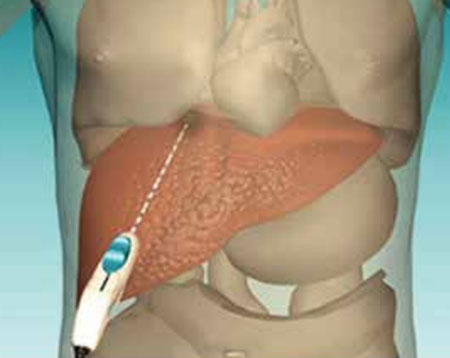 You will remain in the recovery room until you are completely awake and ready to return to your room.

You should be able to resume your usual activities within a few days.

WHO INTERPRETS THE RESULTS AND HOW DO I GET THEM?

Computed tomography (CT) or magnetic resonance imaging (MRI) of the liver is performed within a few days to a month following radiofrequency ablation. A radiologist will interpret these CT or MRI scans to detect any complications and to ensure that all of the tumour tissue has been destroyed.

You will undergo CT or MRI scans every three to four months to check for new tumours.

WHAT ARE THE RISKS OF THE PROCEDURE?

WHAT ARE THE LIMITATIONS OF RADIOFREQUENCY ABLATION OF LIVER TUMOURS?

There is a limit to the volume of tumour tissue that can be eliminated by RFA. This is due to limitations with current equipment. Hopefully technical advances will permit larger tumours to be treated in the future. RFA also cannot destroy microscopic-sized tumours and cannot prevent cancer from growing back in other locations in the liver.

Thank you for requesting an appointment at FV Hospital.

You will shortly receive a reply with all the requested details. Note that though we try our best to respect your date and time preferences the exact moment of your appointment will depend on your doctor’s availability.

Thank you for choosing FV Hospital as your healthcare provide

ASK US A QUESTION

Thank you for contacting FV Hospital.

We have received your enquiry and referred it to the relevant department. You will receive a response within two working days.

Thank you for choosing FV Hospital as your healthcare provider

SEND US YOUR FEEDBACK

Thank you for your feedback. We value your comments as they enable us to improve the quality of our patient care. You will receive a response within two working days.

Thank you for choosing FV Hospital as your healthcare provider.