80-YEAR-OLD GRANDMOTHER SAVED FROM COVID-19: “I HAD A STRONG WILL TO LIVE”

“Willpower is the most important thing in this battle, we must not let ourselves give up,” says Mrs N.T.T., an 80-year-old patient who was admitted with a very severe case of COVID-19, but now is smiling and preparing to be discharged from the hospital after many days of fighting the disease. Twenty days earlier, FV doctors and her family had prepared for the worst, but did everything they could to help Mrs T. pull through.

On August 14, 2021, Mrs T.’s family brought her to the Accident & Emergency (A&E) Department at FV Hospital because she was experiencing symptoms of fatigue, cough with sputum and shortness of breath, accompanied by peripheral blood oxygen saturation (SpO2) fluctuating at 95 percent. According to the initial assessment of the doctors, Mrs T. had a moderate case of COVID-19 compounded by chronic diseases, including high blood pressure and mild anaemia, so she was transferred to the COVID-19 Treatment Department for admission.

However, during the following days, the disease progressed and became more complicated with more severe symptoms. Mrs T. continuously had difficulty breathing, and became more and more tired. At the peak of her illness, four days following admission, Mrs T.’s SpO2 index dropped below 85 percent. At this time, because her oxygen demand had increased so much, the doctors switched from breathing through a mask (15 litres/min), to the method of high-dose oxygen breathing via high frequency nasal cannula (HFNC, 60 litres/min), but Mrs T.’s SpO2 index still averaged only 86 to 90 per cent. 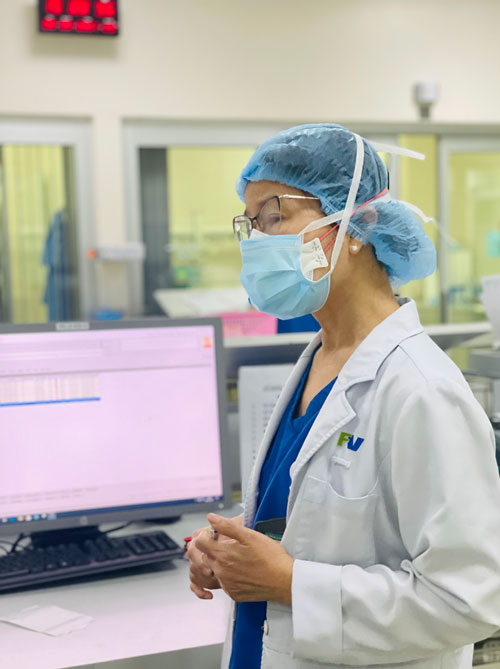 During the evening of August 20, 2021, realising that the patient was in a critical condition with COVID-19-related pneumonia, the doctors at FV’s Intensive Care Unit (ICU) decided to intubate. Nguyen Thi Lam Giang, MSc, MD, Head of FV’s Department of Anaesthesiology and Resuscitation, acknowledged that the survival rate of elderly patients when intubated is very low, especially in patients with COVID-19. Recent reports show that the success rate remains poor and the sequelae are risky, so doctors will always consider the situation very carefully when making this medical decision. “There are cases where we have to call the patient’s relatives so that they can both see and hear each other at least one more time as it’s really difficult to predict what will happen after intubation,” says Dr Lam Giang, referencing other similar cases.

Mrs T. was prescribed anti-inflammatory drugs, antibiotics and anti-viral drugs and provided an appropriate nutrition plan and strict physical therapy. During four days of treatment and intensive care, Mrs. T.’s condition underwent spectacular changes. Doctors assessed that it was possible to slowly wean Mrs T. off the ventilator earlier than expected. If an  elderly patient is on a ventilator for a long time, they may suffer many adverse complications, such as pressure lung damage, infection, and prolonged sedation dependence. Therefore, the ventilator should be removed as soon as possible to reduce pressure and restore normal breathing at the earliest opportunity. 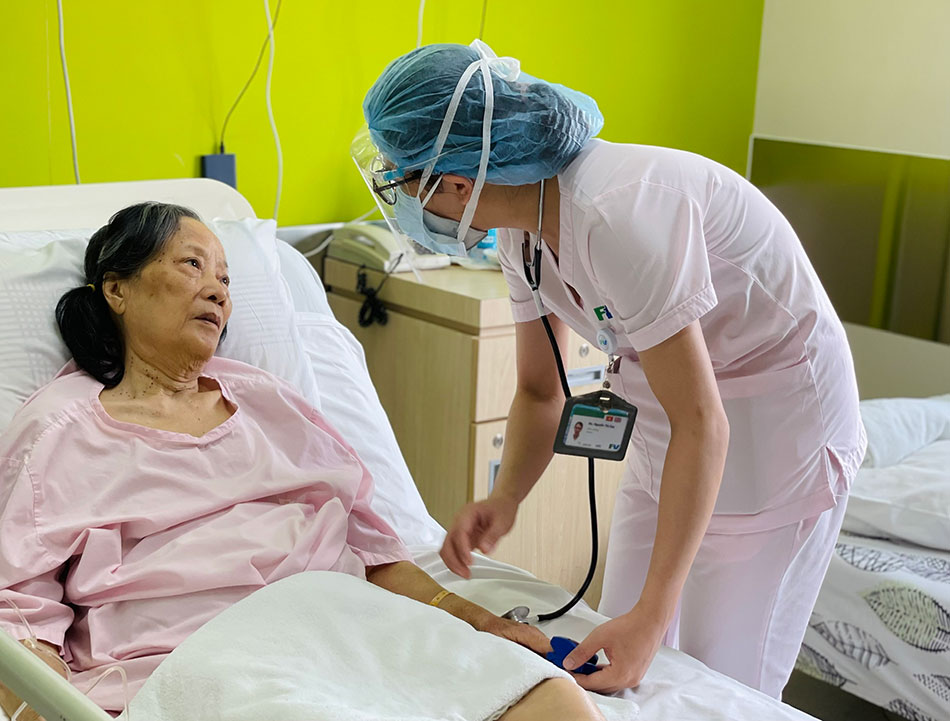 Mrs N.T.T. has recovered spectacularly after 20 days fighting with COVID-19

On August 25, 2021, after five days of intensive care, Mrs. T was extubated, continued to receive oxygen support through the nose, alternating with HFNC treatment which was gradually decreased over the next week. Subsequently, Mrs T.’s health gradually stabilised, and step-by-step she emerged victorious over the SARS-CoV-2 virus after mortal combat spanning nearly 20 days.

“We have tried to closely monitor the patient, come up with the best options in each stage, and apply the right treatment strategy in a timely manner. In addition, Mrs T.’s spirit, the will to live and the care from her family are also important factors that helped save her life,” said Dr Lam Giang.

Mrs N., Mrs T.’s daughter-in-law, shared that both she and her family tested positive within a few days. Mrs T. was old and had many chronic diseases, so when she showed the first sign of being symptomatic, the family took her right away to FV, while Mrs N’s husband and two children continued to quarantine at home. At first, when Mrs T. was just admitted to the hospital, her mood was extremely confused, and seeing Mrs. T’s condition getting worse made Mrs N. think of the worst case scenario. Because Mrs N. is also a F0 without symptoms, she was accepted by FV hospital to take care of Mrs. T. After arranging the housework, Mrs N. stayed in the hospital to support Mrs T.’s care and increase her morale. “My mother-in-law is a very energetic person, she never complains and always stays positive when she is sick, so I still believe she will get through this situation. I know that FV takes good care of her, but I still want to be by her side so that she doesn’t feel sad,” added Mrs N.

When asked what gave her the energy to fight the disease, Mrs T. said: “Trust in my doctor, and the will to never give up. At first when I was hospitalised, I was also afraid that my children would abandon me, but when I believed that my family was still with me. I did everything to be able to go home for my children.”

Meanwhile, “Granny”’s bright smile (as the medical staff affectionately refer to Mrs T.) in the days before being discharged from the hospital, was not only encouragement for doctors, nurses, and the medical staff working day and night at the COVID-19 Treatment Department, but the spirit of victory they hope was transmitted to the many SARS-COV-2 patients still fighting in their hospital beds.

80-YEAR-OLD GRANDMOTHER SAVED FROM COVID-19: “I HAD A STRONG WILL TO LIVE”

Thank you for requesting an appointment at FV Hospital.

You will shortly receive a reply with all the requested details. Note that though we try our best to respect your date and time preferences the exact moment of your appointment will depend on your doctor’s availability.

Thank you for choosing FV Hospital as your healthcare provide

ASK US A QUESTION

Thank you for contacting FV Hospital.

We have received your enquiry and referred it to the relevant department. You will receive a response within two working days.

Thank you for choosing FV Hospital as your healthcare provider

SEND US YOUR FEEDBACK

Thank you for your feedback. We value your comments as they enable us to improve the quality of our patient care. You will receive a response within two working days.

Thank you for choosing FV Hospital as your healthcare provider.